You are here: Home / About Us

We’re an entrepreneurial lot (or maybe we’re just quackers!) After coming up with the idea for using Amphibious WW2 landing crafts to run Rotorua tours over christmas lunch one year, we went about putting our money where our mouth was and making it happen.

Rotorua Duck Tours is the first, and still the only, company in New Zealand to provide the unique and exciting opportunity to explore a special part of New Zealand in an authentic amphibious WWII landing craft. 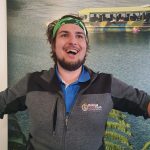 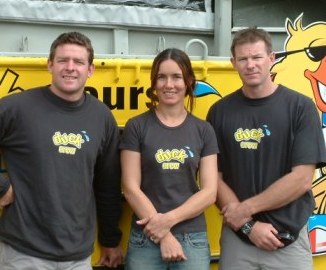 A real family affair, Rotorua Duck Tours is owned by brothers Peter and Trevor Weir and their families. The first tour kicked off in December 2003 and shortly after a second duck was purchased from Queenstown, NZ. A third duck has been purchased from Oregon, USA and should be operational in the future.

Fun, entertaining, a ‘little bit different’ – all reasons why Rotorua Duck Tours has gone on to become so well-known. Now rather famous throughout Rotorua and wider New Zealand – although Trev & Pete are a little too modest to admit it! – the tours are seen as a Rotorua ‘Must Do’ and thousands of visitors have enjoyed their unique offering.

Our vehicles have been converted fully to comply with strict New Zealand Land Transport Association (LTSA) and the Maritime Safety Authority (MSA) safety regulations. The Duck complies to the same standards as a Passenger Service Vehicle and goes through Vehicle Testing six monthly. Our current PSL vehicle rating is 4.5.

Rotorua Duck Tours also maintains the vehicles daily with a robust set of checks and maintenance that staff have to go through and signoff. Our drivers also undertake a rigorous training programme designed to prepare them for any situations that may arise on the duck. The training period is a 3-6 month training process and includes Maritime New Zealand approved training which is both in-house and external.

Rotorua Duck Tours has been awarded a Qualmark Silver Award from Qualmark New Zealand. Qualmark provides evidence that our business has been independently validated as a quality tourism business.

Rotorua Duck Tours is visited regularly by Qualmark, with a review done of all elements of the business both back and front office to ensure a quality experience. The qualmark endorsement is only provided to those that are constantly delivering a safe, sustainable product and are able to showcase true New Zealand hospitality.

Rotorua Duck Tours takes great pride in being a member of the Rotorua Sustainable Tourism Charter, set up to provide guardianship over the resources of Rotorua.

Sustainability on our Lakes

Rotorua Duck Tours also works closely with the Rotorua District Council regarding Biosecurity, specifically around the spreading of aquatic pests. We have policies and practices in place where checks are done after exiting all lakes to ensure no aquatic plants are present. We also get regular updates from Biosecurity and as part of our tour provide an educational element around the use of boats on the Rotorua Lakes and ensuring aquatic plants and weeds are removed when exiting all lakes. For more information on stopping the spread please go to  www.boprc.govt.nz/pestpatrol